“Oh my god! What’s that in the picture?”

In the photograph above, taken by the ever-vigilant Cat Sparks, you can see artist extraordinaire Nick Stathopoulos and author Robert Hood studying Nick’s latest attempt to get a decent author shot for Peripheral Visions in a fire-ravaged part of Katoomba’s hinterland, while unsuspectingly being watched by an “uninvited guest”. It must have been a sun-flare, surely!

Here, click on the image below to take a closer look: 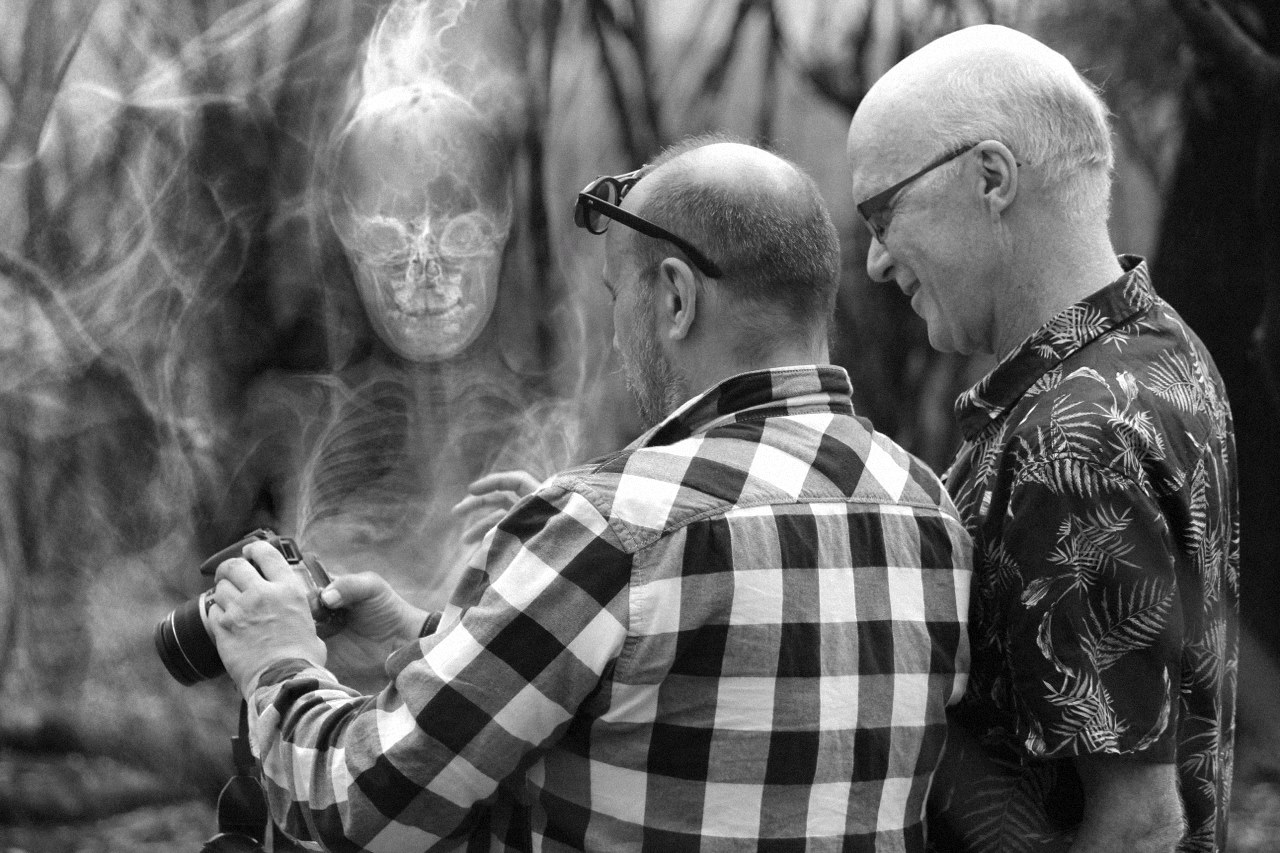 Spirit photography has been a popular pastime since the invention of the camera — and even more so since the invention of photographic manipulation, which has of course reached a peak of efficiency in these digital times. Naturally, no one’s accusing anyone of anything here, are they? Though one has to admit that Nick had his hands on the image file for some time before he sent it on to me….

Nick Stathopoulos is a much respected and much awarded artist, whose work on innumerable genre-based book covers has been a mainstay for decades. He also paints the most amazing hyper-real portraits (which have been hung in the prestigious Archibald Portrait Prize exhibition) and astonishingly beautiful toy images (in several successful personal shows under the banner “Toy Porn”). IFWG Australia Publishing and I were lucky to get his services to design covers for the various editions of Peripheral Visions, especially as the job morphed into a full-scale visual “branding” once he applied his newly created ghostly aesthetic to full-page images for the six thematic sections of the deluxe hardcover edition of the book (along with a frontispiece, a signature page and even the author photo).

You can check out the covers Nick designed for Peripheral Visions under in the article headed PERIPHERAL VISIONS: THE BEGINNING on this site, as well as on the IFWG Australia Publishing site. At the moment, Nick’s “Haunted” images for each of the sections are being revealed weekly – so far, “Haunted Youth”, “Haunted Families” and “Haunted Minds”.

Of course, that has nothing to do with the picture above, which coincidentally displays the same aesthetic. Reality follows art, right?